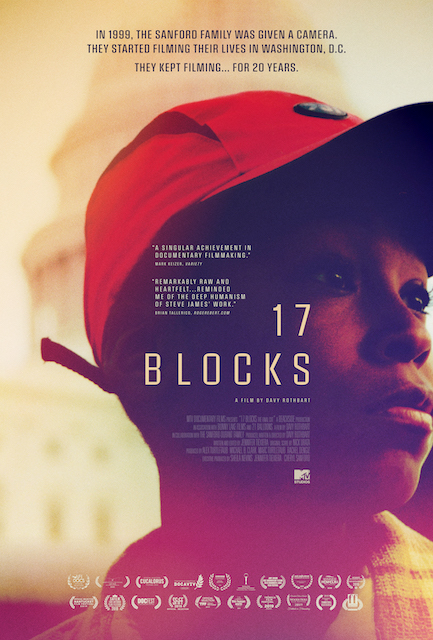 In 1999, filmmaker Davy Rothbart met Emmanuel Sanford-Durant and his older brother, Smurf, during a pickup basketball game in Southeast Washington, D.C. Davy began filming their lives, and soon the two brothers and other family members began to use the camera themselves. Spanning 20 years, this story illuminates a national, ongoing crisis through one family’s raw, stirring and deeply personal saga. Made from more than 1,000 hours of footage, it all starts on the street where they lived in 1999, 17 blocks behind the U.S. Capitol.

“More than just a singular achievement in documentary filmmaking, “17 Blocks” is the result of the Sanford family’s profound act of bravery..” — Variety

“Absorbing, dramatic, and intimately observational… a documentary unfolding with the unexpected twists and turns, tragedies, and triumphs that only real life can, and it presents a microcosm of the history of racial strife and injustice that occurred over those two decades.” -The Boston Globe